We’re thrilled to announce our innovative new collaboration with Vitsœ, the internationally-known British furniture manufacturer, in its newly opened production building here in Royal Leamington Spa. We will join them from January 2018, when we will use the space for rehearsals.

We entertained guests with a performance of Captive on Saturday 14 October, at a launch event which revealed the new building. The collaboration has received capital funding from Arts Council England. 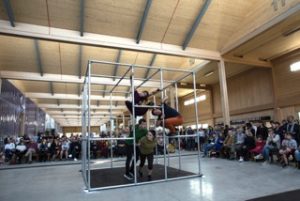 Louise Richards, founder and Executive Director of Motionhouse said, “This is a hugely exciting step for us. Our collaboration with Vitsœ brings the arts and manufacturing together in one inspirational space, to create a vibrant working community. We look forward to joining Vitsœ in its new home.”

Vitsœ has chosen to settle in Leamington Spa due to the town’s excellent transport connections; the community’s rich industrial heritage; the close proximity to the universities of Warwick and Coventry and the distinguished architecture. Construction began on the prominent 3.3 acre site – previously the site of the Ford Foundry – in October 2016. The new building, spanning 135 metres in length, 25 metres in width and 6 metres in height, is a place of making and creativity, embracing offices, research and development, product assembly, kitchen and dining, overnight accommodation and more. Vitsœ exports to over 60 countries and has shops in London, New York, Los Angeles and Munich.

Mark Adams, Managing Director of Vitsœ said, “In Leamington we have found not only a town with a rich industrial and architectural heritage but we have been embraced by a community without whom we could not have realised this vitally important step in Vitsœ’s long history.”

Matt Western, MP for Warwick and Leamington said, “It is extremely exciting to be welcoming a prestigious company such as Vitsœ to the area. Their decision to locate here underlines the attractiveness of the region to inward investors and in particular to businesses operating in the design and wider creative sector.”

A number of bespoke tours to visit Vitsoe’s new building will be available by registering at [email protected]. Read more in this article from the Leamington Courier.

See Images Of The Building